The Food, Nutrition, and Basic Skills Program (FNBS) is a coalition effort between students, staff, faculty, and community members to empower our students with the skills to become more food secure, we aim to support student success in the kitchen and provide skills they can utilize long after graduation. All recipes are designed to be affordable, flexible ingredients, and can easily incorporate different dietary preferences.

Keeping safe in the kitchen is the foundation for culinary success. Join Nathan as he demonstrates how best to hold a knife and ways to cut an onion.

Recently there have been food shortages in certain items, so we have compiled a substitution chart for bakers who are out of milk, eggs, yeast, and flour.

Like different types of plant-based milk, there are also many plant-based flours that you can make at home; there’s rice, coconut, and potato flour. However almond and quinoa flour are much easier to make, and have closer ratios to the conventional All-Purpose flour used in baking recipes. Out of all homemade flours, almond flours have one of the closest ratios to normal AP flour; after blending almond in a food processor until it is essential powder, one cup of almond flour is equivalent to one cup of AP flour. Quinoa flour can also be used as well! Because it is denser than almond and AP flour, after dry blending it, only a ½ cup of quinoa flour is necessary to substitute for 1 cup of AP flour.

Although dairy milk tends to be the go-to milk in both consumption and baking, there has been a rise of interest in plant-based milks. Great for those who are lactose intolerant, plant-based milks may be more expensive but they are cheap and easy to make.
There have been many recipes to make various plant-related milks, but the general rule for oat and almond milk is to have a ratio of 1 cup of oats or almonds to 4 cups of water. With the oats, you can blend them directly with water, strain it, and your oat milk is ready to use-- though we recommend you not to soak the oats to prevent a “slimy-taste.” However, for cashew or almond milk, make sure to soak before blending!

Indispensable in baking, yeast is experiencing a shortage that makes bread-making more difficult. However, there are home remedies that use a combination of ½ teaspoon of baking soda and ½ teaspoon lemon juice to make 1 teaspoon in yeast; the acidity in the lemon juice activates the basicness of the baking soda, which will lead to the release of oxygen. This simulates the reaction that yeast will have during baking.

Eggs are versatile products in cooking because they can be used in recipes ranging from macaroons to spaghetti. Luckily, alternatives like applesauce, bananas, and canned pumpkins work rather well; ¼ cup of applesauce or canned pumpkin, or ½ of a banana is equivalent to an egg.

WHAT’S the smoke point for these COOKING oils?

Have you ever made a dish that had a bitter taste, something that you didn’t intend to do? This might have happened because the stove went over the oil’s smoke point. A smoke point is something that all oils have; once it reaches a certain temperature, it will start to break down, give off visible smoke, and taste bitter-- which might explain the bitterness of the food cooked in oil. Additional factors like the age of the oil, type of cooking pan, the way it is stored in the kitchen, or its individual level of refinement can all affect an oil’s smoking point. 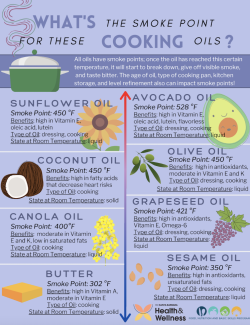 Highest up on the list is the avocado oil. With its smoke point reaching 528 F°, avocado oil has numerous benefits ranging from high levels of Vitamin E, oleic acid, and lutein to having a flavorless taste. Stored as a liquid at room temperature, it can be used in dressings and cooking.

Similar to avocado oil, sunflower, olive, and coconut oils have high smoke points of 450 F°. However, their similarities end here. Sunflower has the same nutritional benefits, state at room temperature, and usages, but has a nutty aftertaste to it. Meanwhile, olive oil has a distinct taste; containing Vitamin E and K, it is high in antioxidants. On the other hand, unlike sunflower and olive oil, coconut oil is in a solid state at room temperature, should be used in cooking instead of dressings, and has a sweet distinct flavor. It is also high in fatty acids, which decreases heart risks.

Further down the chart, grapeseed oil can be used up to 421 F°, canola oil goes up to 400 F°, and sesame oil is lower at 350 F°. Tasteless, high in antioxidants, Vitamin E, and Omega-6, grapeseed oil is liquid at room temperature and can be used in both dressing at cooking. Like coconut oil, canola oil only be used for cooking and contains moderate amounts of Vitamin E and K, and is considerably low in saturated fats. With a low smoking point, sesame oil has unsaturated fats and is high in antioxidants, and should be used at low to medium heat.

Butter, like most of us know, is solid at room temperature. Clocking in at 302 F°, it has the lowest smoke point in this chart and should only be used in the cooking. Moderate in Vitamin E, butter makes up for this in its high levels of Vitamin A.

or the CalFresh website for more recipes and support.